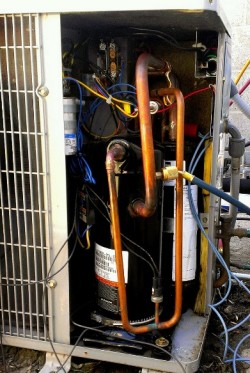 The compressor is the engine which drives your air conditioning system. Without it, there would be no transfer of heat, and no relief from rising temperatures.

As we noted before, your compressor produces high-pressure, high-temperature gas, which flows through the outdoor coil, releasing heat. It does this by squeezing (compressing) the refrigerant into a smaller and smaller space, producing a gas under extremely high pressure.

You’ll often hear about two kinds of compressors – scroll compressors and piston compressors. They do the same job of squeezing the refrigerant, but they achieve their aim differently.

Piston compressors (also known as reciprocating compressors) use pistons attached to a crankshaft to compress the gas. This is not unlike the pistons in your car’s engine. Your home’s compressor is likely to be semi-hermetic. That is, the housing is not welded shut, but rather held together by nuts and bolts. This design makes it possible to reach in the inside of the compressor for repairs and service.

A scroll compressor uses two spirals of metal to move the gas into an increasingly tight chamber.  One spiral remains stationary, while the other orbits inside it, creating pockets of gas between the two spirals.

Compressor problems can range from poor power supply to internal leakage. A compressor that runs but will not cool is a sign that a valve has broken inside, and you will need a new compressor.

Removing a compressor requires removing all of the refrigerant from the system before cutting the copper lines and unbolting the compressor. This requires the use of a specialized refrigerant recovery system, and must be done in compliance with EPA regulations.

This post was written by Air Conditioning Service, Inc.